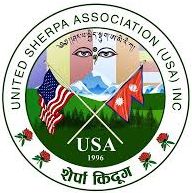 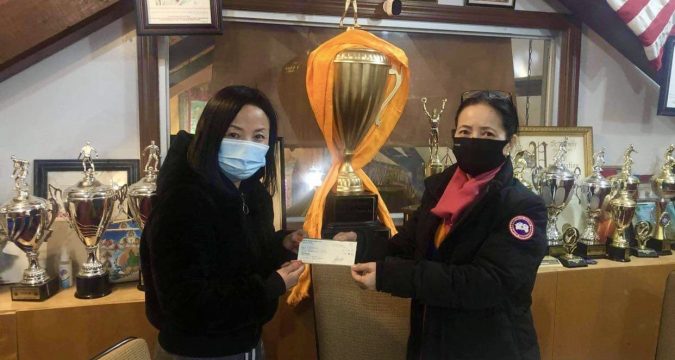 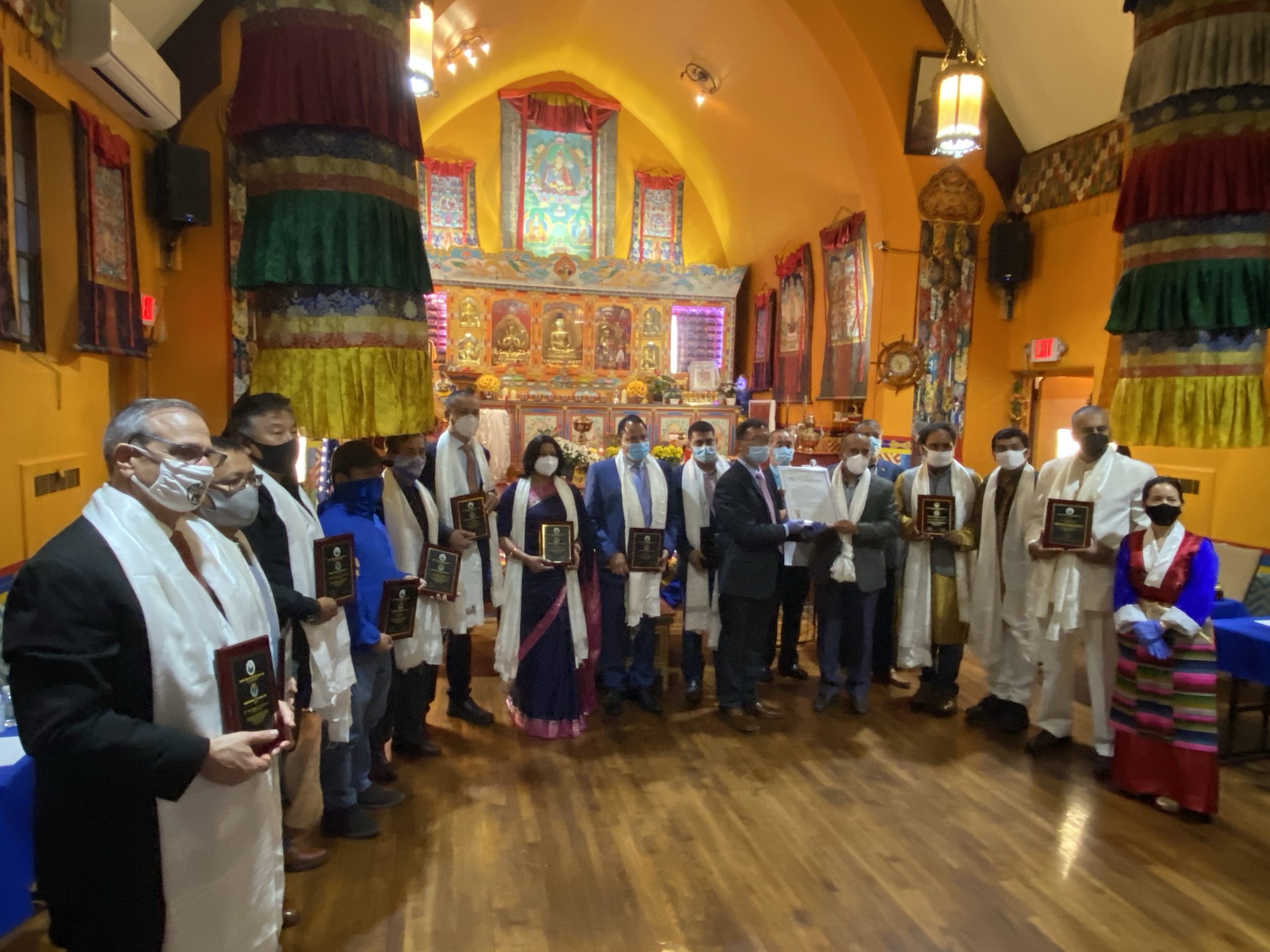 United Sherpa Association, the umbrella organization of Nepalese Sherpas in the USA, and the Humanitarians of the World, Inc. organized ‘COVID-19 Champion Award and Dinner Gala 2020’ on Saturday, October 24th, 2020, to honor community heroes who have been making an exceptional contribution in combating the global pandemic in New York City.

United Sherpa Association has been distributing face masks, gloves, hand sanitizers, Tylenol, thermometers and thousands of meals to needy, homeless, and hungry people at the temple since the pandemic out-break in the world’s most happening city. The volunteers of the United Sherpa Association delivered PPEs and groceries to over 800 Covid-19 infected families. Similarly, the Humanitarians of the World Inc has been providing food and necessities to thousands of people in the Elmhurst area, specifically, and throughout the five Boroughs of NYC, in general.

Speaking as the Keynote speaker the Queens Borough District Attorney, Malinda Katz said, “the job you have done is the best job in this hard time and will never be forgotten.” She praised both organizations for their remarkable community service.

Acting Queens Borough President Sharon Lee praised the United Sherpa Association and Humanitarians of the World Inc and presented them with citations.

Catalina Cruz, New York State Assembly member appreciated the job done by both organizations to help the families infected by Covid-19. “When fear and need was everywhere you stepped up for the humanity,” she said.

State Senator Jessica Ramos, newly elected Assembly member Jessica Gonzalez-Rojas and other elected officials were there to praise the champions. Inspired by the efforts during this hard time, the organizers honored some social heroes, selecting through the nomination process, including the first responders, elected officials and volunteers as listed below:

The ceremony was held following the CDC guidelines and protocols declared by New York City.
The program was moderated by Dr.Adal Hussain founder of Humanitarians of the World Inc and Karma Lama General Secretary of United Sherpa Association.

Here are some glimpses from our event 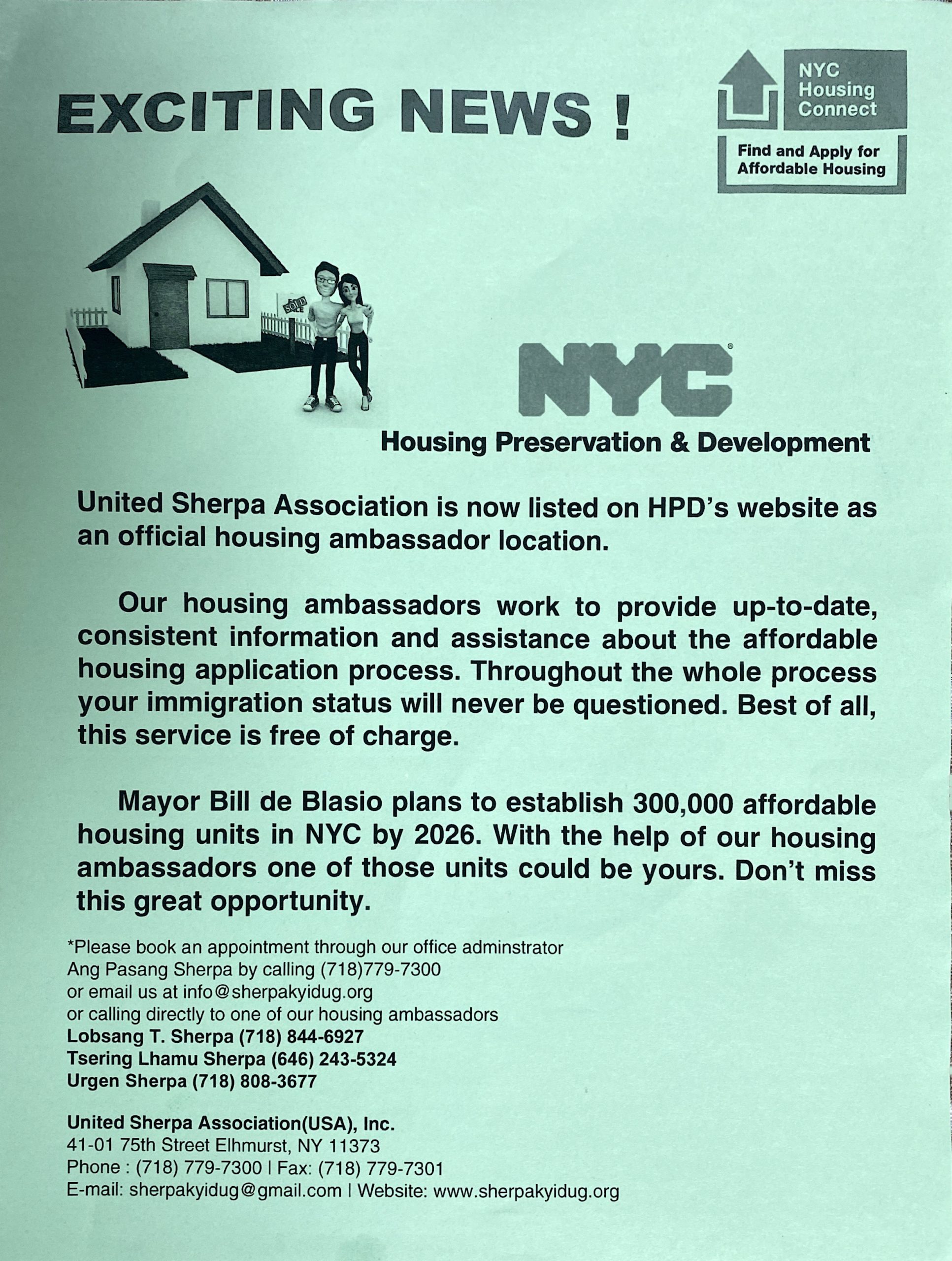 Our housing ambassadors work to provide up-to-date, consistent information and assistance about the affordable housing application process. Throughout the whole process your immigration status will never be questioned. Best of all, this service is free of charge.

Mayor DeBlasio plans to establish 300,000 affordable housing units in NYC by 2026. With the help of our housing ambassadors one of those units could be yours. Don’t miss this great opportunity. 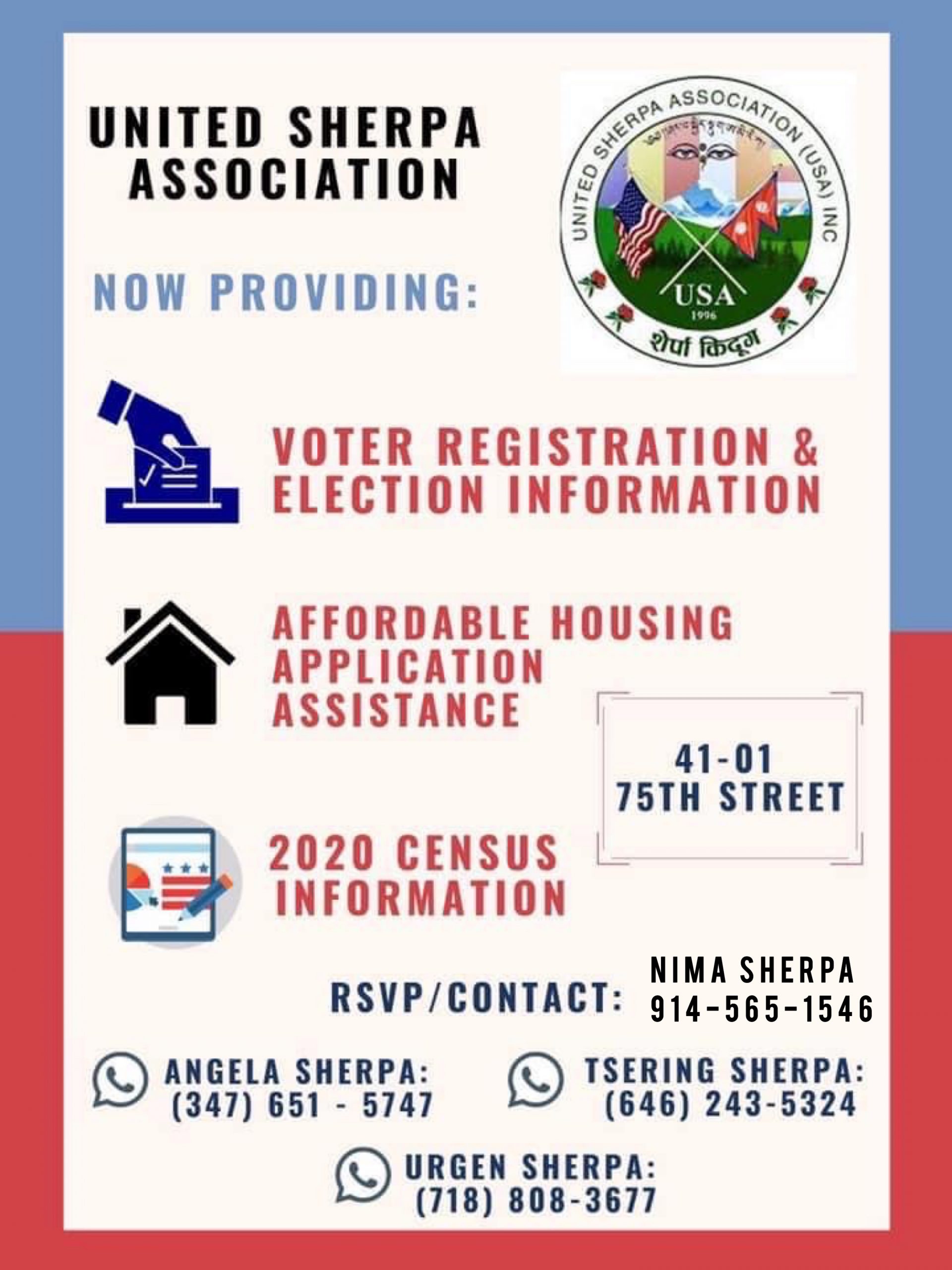 Our housing ambassadors work to provide up-to-date, consistent information and assistance about the affordable housing application process. Throughout the whole process your immigration status will never be questioned. Best of all, this service is free of charge.

Mayor DeBlasio plans to establish 300,000 affordable housing units in NYC by 2026. With the help of our housing ambassadors one of those units could be yours. Don’t miss this great opportunity.

*Please book an appointment through our office adminstrator Ang Pasang Sherpa by calling (718)779-7300 or email us at info@sherpakyidug.org 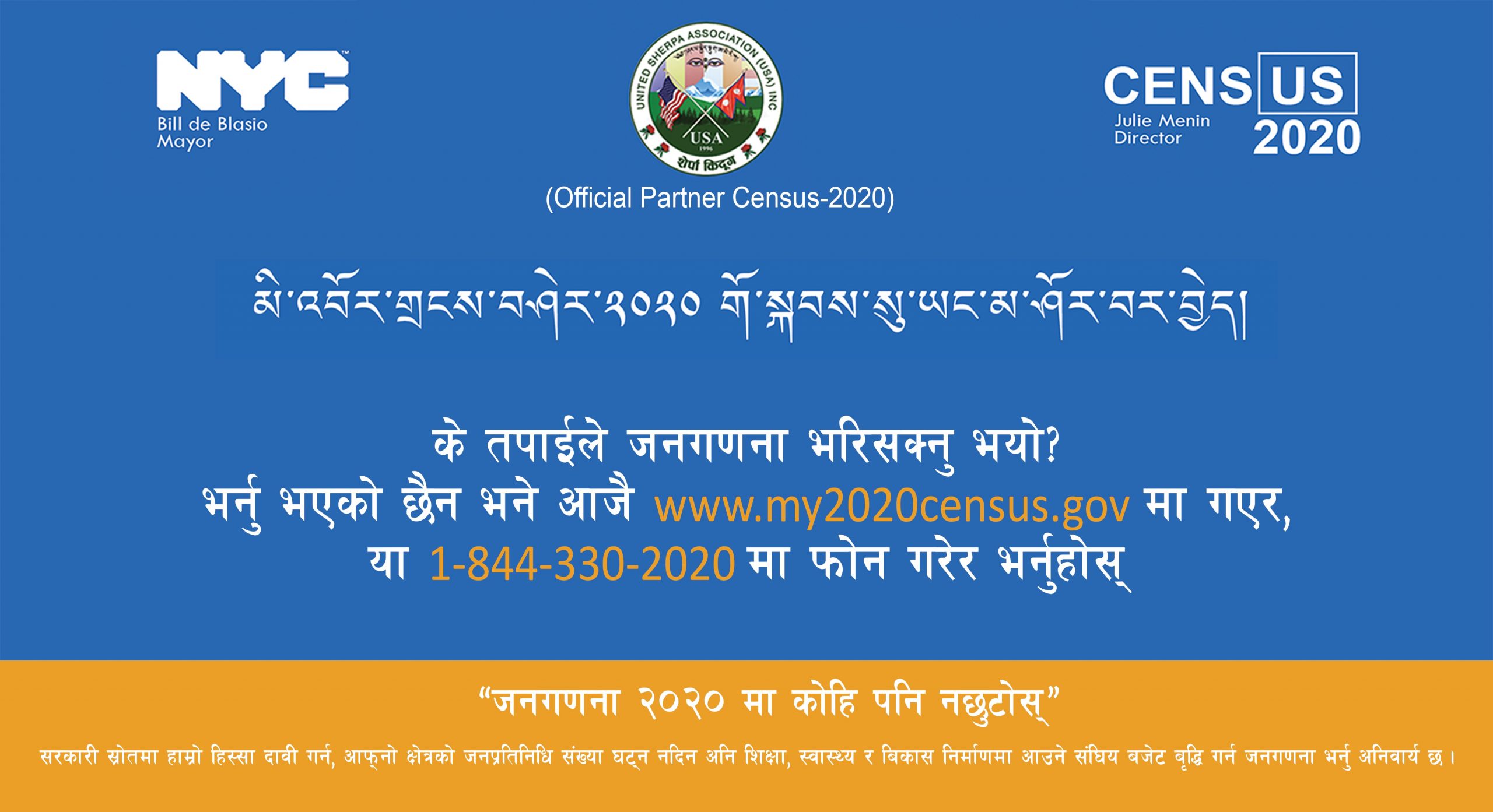 Author: admin  Published Date: July 28, 2020  Leave a Comment on Have you filled your census form yet? 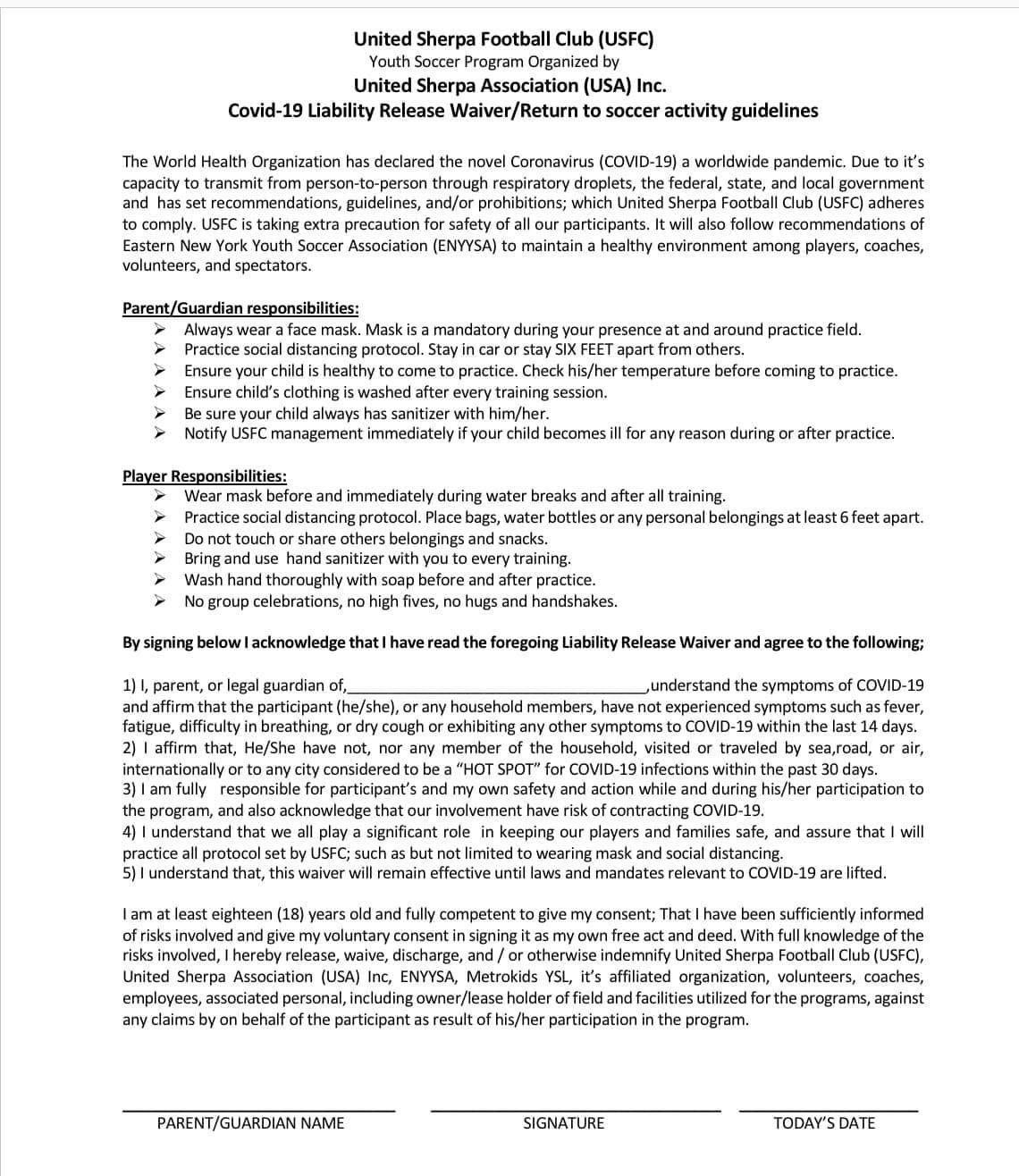 Although NYC is in it’s phase 4, New York Park Department has suspended all permits till now. We are waiting for permits to be released.

USFC is eager, and prepare to open it’s program as soon as permits are validated. We are working tirelessly to provide safe environment for our young ones. As well known proverb states,”Better safe than sorry”. We will take all precautions to reopen safely.

We will post our gradual reopening schedule once we have our permits. Meanwhile, please review our waiver form below. 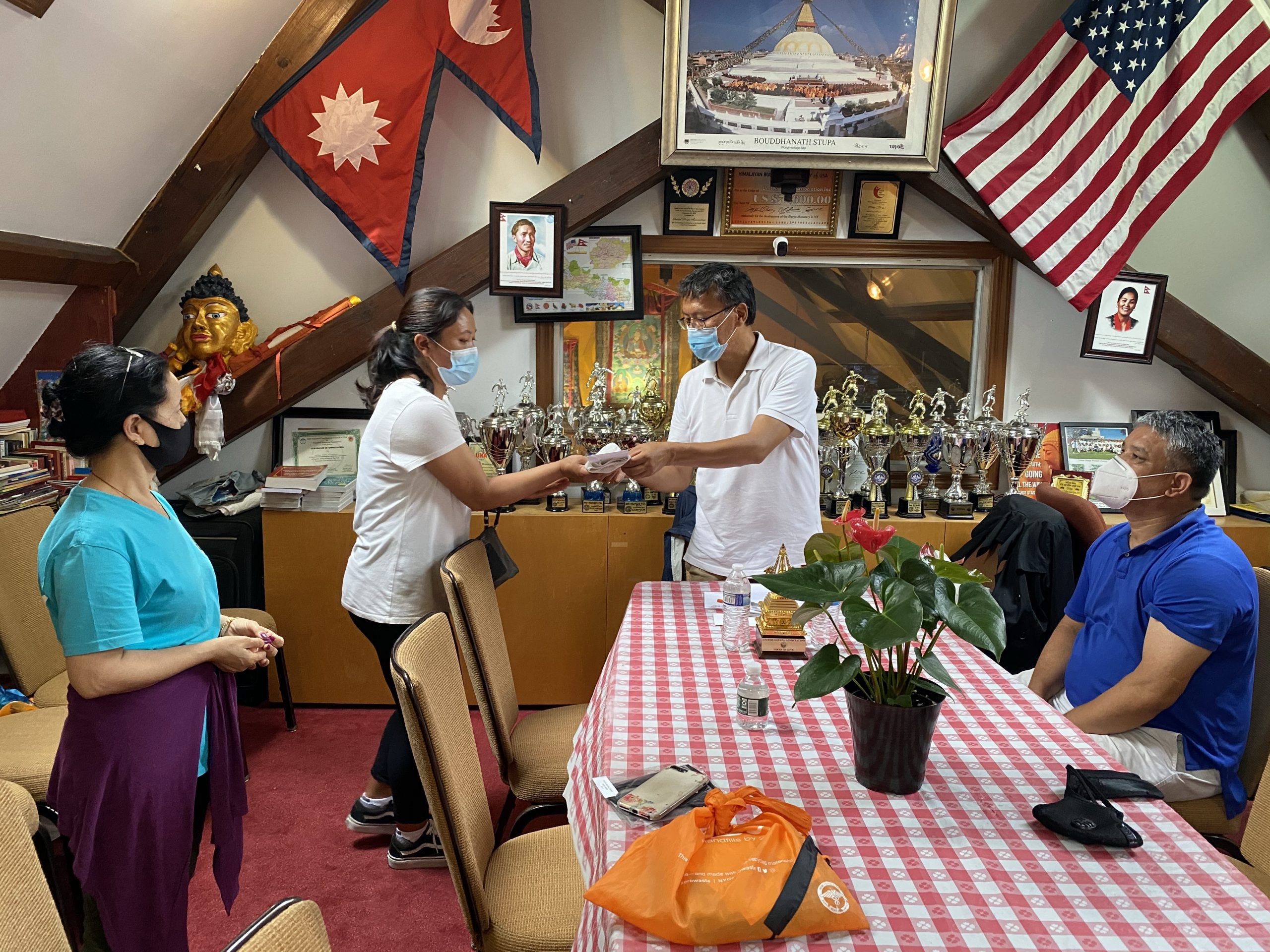 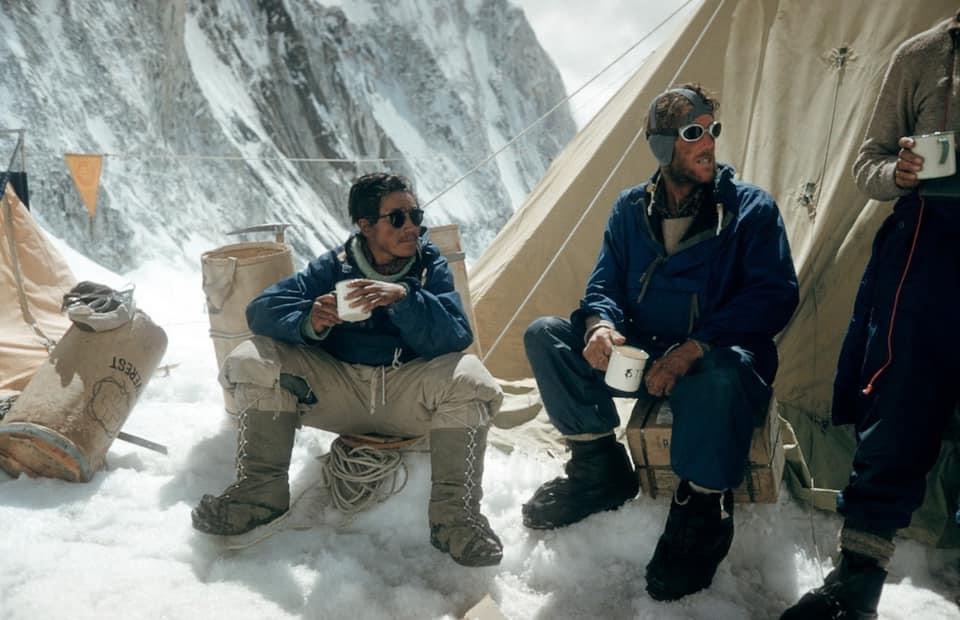 May 29th 2020 : 67 years ago, the late Tenzing Norgay and late Sir Edmund Hillary became the first humans to ascend the highest peak on the planet, Mt. Everest. Their historic achievement on May 29th, 1953 has inspired many generations to aim for what others might think is impossible.

After their successful summit the heroic pioneers took on another lofty goal: empowering remote Himalayan people. Their leadership in this movement made them pioneers in a different field. The personally created schools, hospitals, and infrastructure that continue to be the backbone of the Sherpa people.

Their legacy continues in their descendants who continue to lead the way on the humanitarian issues of education, healthcare, and quality of life.

Today United Sherpa Association salutes all selfless pioneers of the past and present for their brave efforts on behalf of the future.

Some of the glimpses from the event : 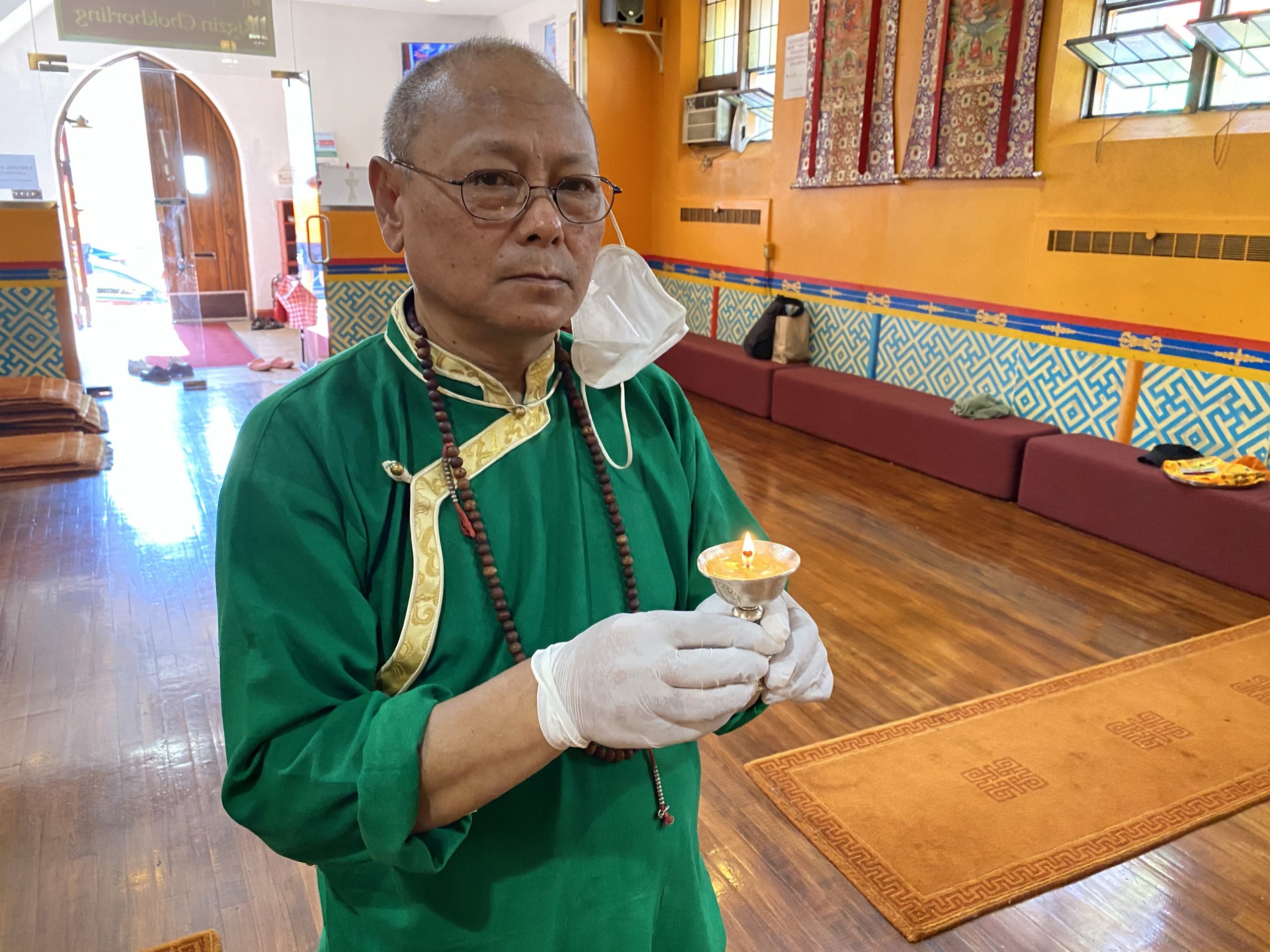 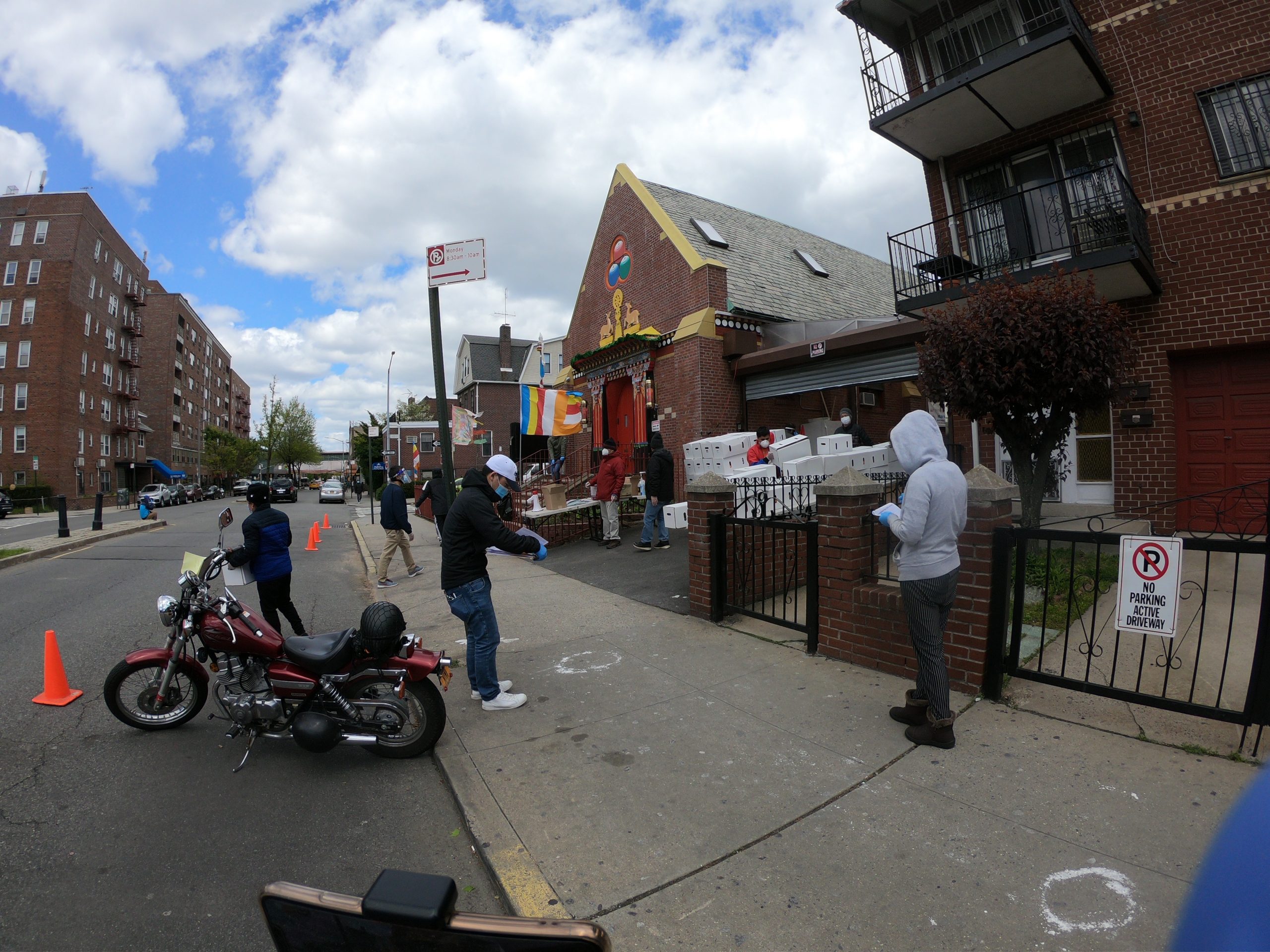 May 9th 2020 : As the coronavirus has ravaged the immigrant community both physically and financially, and some of the families are struggling just to find food and pay for it.

We have distributed 300 boxes of groceries today .